Quote from the article at the link:
“Firstly, people running fund raising events to raise money for any animal rescues, even registered charities, should publish RECEIPTS of the money they send over to them. Then people who have donated money can see where it has gone, and the fund raiser is protected from accusations of being fraudulent.

Secondly, genuine animal rescues should be able to show PROOF, in the form of RECEIPTS, of what exactly they are doing with every penny of the funds sent to them”.

It is advised in the article at the link that PROOF of what donation money is being spent on is provided by the rescue publicly posting bank accounts, PayPal accounts, and fundraiser accounts such as GoFundMe, YouCaring, etc, PROOF through photos of animals having procedures done that the rescue is saying are being done (a legitimate donation-funded rescue should also be perfectly willing to publicly post ALL vet reports, ALL euthanasia reports, and ALL vet bills), and they give several other bits of advice regarding how to avoid being scammed.

Because the number of supposed “non-profit” animal rescues in the US has sky-rocketed because of social media and networking providing FREE marketing, FREE public operation, and FREE “real time” fundraising for ‘crisis rescues’ when money is needed NOW, many animal dealers and traders have become “rescues” (these are usually the people that weren’t actually very good at buying and selling animals using their own money to run their business) because:

1. they don’t have jobs and don’t have their own capital to buy animals they are going to “fix-up” and sell;
2. the donation money they beg for is all tax free and does NOT have to be declared as income.

If a donation-funded rescue that operates and markets themselves publicly is unwilling to do what is advised in the article above, and also in this blog post, regarding showing the various types of documentation (written, photographic, and video) for ALL of the animals they rescue, then it is easy for a potential donor to move-on to the next rescue on their list and see if they will provide the information that is being asked for.

Until there are more controls not only regarding the finances of the rescue, but also inclusive of WHERE ALL of the rescued animals ARE and WHERE they end-up, public display of vet reports, vet bills, euthanasia reports and bills, etc, and regarding animal rescues accountability and transparency, when considering donating ones hard-earned money to an animal rescue, gather as much information as possible regarding their finances, monies coming in from donations, material goods donated (i.e. vet services, feed, dog and cat grooming, farrier services), ask for vet reports and vet bills for every animal that is seen by the vet according to what the ‘rescue’ is posting, ask how many animals the rescue has rescued in the previous 2 years, how many animals have they adopted-out, how many animals have they euthanized, and how many animals are currently at their facility and/or in foster care.

That way, potential supporters can fact and background check a donation-funded adoption-based rescue, and see if their numbers of rescued animals coincides with what is at their facility or in approved foster care, how many have been adopted into good homes that can be VERIFIED where they are, and also how many “had” (the rescue should post vet reports that verify WHY the animal was euthanized, and also provide publicly euthanasia reports from a licensed veterinarian, and also body disposal bills) to sadly be euthanized or “put down” or killed in whatever way.

Its encouraging and promising for the animals that really NEED rescuing that more and more people are asking questions and expecting answers BEFORE they follow, support, and/or donate to a rescue because the Internet and social media/networking has been both a blessing, but also a curse regarding animal rescue.

A blessing because for those infrequent times rescuing animals really is an emergency and not a staged and choreographed “crisis rescue”, people can be alerted in real time that animals need help immediately and they can Share and donate in order to help a registered rescue save lives.

However, social media advertising/networking is also a curse because real animal rescue is mostly made up of the daily, every day tasks and functioning of the rescue facility which is usually daily interaction with the animals of feeding, watering, playing and interacting with them socially, etc, but is not really exciting, adrenalin-pumping crisis rescuing that MANY of the  dealers/traders that are actually “retail rescues” seem to do at least once-a-week, and sometimes more often depending on how much money they need for “whatever” (donation-money given to ‘retail rescues’/dealers/traders/flippers is often spent on their own personal non-rescue animals, their children, food, dining out, going on vacation while their free slave-labor volunteers take care of the rescue facility and the animals, buying clothes, vehicles, property, and other personal items).

The reason these retail rescues stage so many “crisis rescues” is because they are catering to, and RELYING on in a sick ‘partnership’, those people that DON’T and WON’T ask questions, and are addicted to crisis-rescuing primarily to break up the monotony and boredom of their real lives. They truly “live for” crisis-rescuing, and this is what the scammers in ‘retail rescuing’ count on in order for them to collect thousands of dollars in entirely FREE donation-money they currently are NOT required to account for and/or show receipts for.  NOT even when someone asks to see them.

So for those kind-hearted, compassionate animal lovers that want to KNOW that their hard-earned money is truly going to help animals in need and/or take care of animals that have already been rescued and are needing to be maintained for months, and sometimes even years, the information page and questionnaire at the link below and also displayed, also offers some ideas regarding what questions to ask of a publicly donation-funded, publicly marketed, publicly operated animal rescue so that supporters will know if they are dealing with a real and legitimate animal rescue, or perhaps not, and they may in fact be on the verge of falling prey to animal traders/dealers/flippers masquerading as animal rescues. 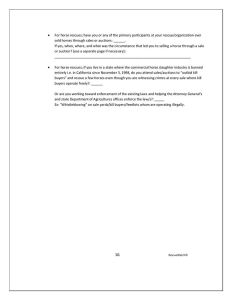 3 thoughts on “Advice on How To Avoid Animal Rescue SCAMS”