People that are new to animal rescue, and even many of the “old pro’s” in animal rescue that happen to be ethical and honest, don’t know that more and more of the current day animal “rescues” (since social media came on the scene made marketing and PR FREE AND EASY for scammers soliciting money from gullible people around the world through PayPal, GoFundMe and bunches of online credit card payment venues) donation-funded animal “rescues” are actually animal dealers/traders and traffickers.

Excerpt from the article at the link:

Humane relocation: Humane relocation refers to the practice of transporting un-owned pets in need of adoption (primarily dogs and cats) from areas with a surplus of homeless pets to areas with a higher demand for pets and more shelter and rescue space. When done responsibly, it is a cooperative, common-sense method of finding homes for pets that might otherwise be euthanized. When done without care, it does nothing to solve the problem of pet overpopulation at its source, and in some cases even encourages it. Worse, it can turn participating rescues and shelters into unregulated pet stores that deal in animals of unknown backgrounds – animals that may have serious behavioral problems or may be infected with parasites and diseases not endemic to a particular region (e.g. whip worm, heart worm, or rabies).

But it is appearing in the news with increasing frequency as sales of these dogs increase:

Dog sellers present the canines with heart-tugging tales of Southern kill shelters. They also describe residents of the South as uninterested in preventing unwanted puppies through regular spaying and neutering. 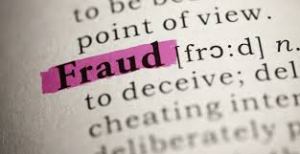 And it doesn’t only happen with dogs and cats being relocated from one shelter to another out of area shelter.

It also happens with horses, exotic animals, reptiles, llama’s, alpaca’s and other species including dogs and cats after animals are seized from their legal and rightful owners on what are called “seizure scams” and “rescue raids” that are happening in epidemic proportions around the world.

The perpetrators of these domestic terrorism attacks are most often greedy primarily, or entirely donation-funded animal “rescues” that are literally “paid to rescue”, with founders, presidents, treasurers (talk about the fox guarding the henhouse!), board members, and other “inner circle” players that have made a career out of receiving FREE donation and grant money for supposedly doing animal rescue.

These are narcissistic, often sociopathic people that are tend to be convincing pathological liars and crooks (although, they do get sloppy sometimes, thinking no one is ever going to follow-through with publicly showing their contradictions and lies) that are often in collusion with tax-payer funded government agencies where they have “insiders” that are paid “kickbacks” and other “goodies” to actually participate in attacking animal owners and seizing their animals, or playing the “shell game” with animals that are unadoptable/unsellable being “traded-in” by the “rescue” and euthanized at animal control and the insider at animal control gives the “rescue an animal that is desirable for donations and/or “adopting for a fee”/SELLING by the “rescue”. 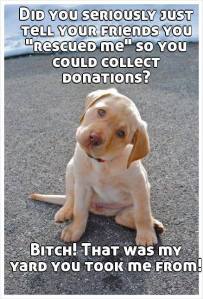 However, since “animal rescues” have in the not-so-distant past (you know, before social media brought in the “opportunist crooks” that finagle money out of naïve and gullible people over the Internet, and also ramp-up mobs on social media to trash, smear, mob, and attack innocent animal owners from afar) been considered “good and kind” (before the “greeders” swooped in and took over donation-funded animal rescue and advocacy where they are master manipulators on social media, parting animal lovers from their hard-earned money over the Internet), MANY TAX-PAYER-FUNDED government agencies, and also the politicians, DA’s, law enforcement, animal controls, etc don’t understand (yet) that they in fact ARE participating in “seizure scams” and are literally attacking and stealing animals from their own local tax-payer animal owners on behalf of what’s OFTEN an out-of-area “animal rescue” that “suddenly” popped-up and said “we’re here to help you with seizures of animals since you don’t have the room or money to do them” – here’s the real kicker though: that so-called animal “rescue” that wants to “help” is often the one that calls in the “anonymous complaint” that got the ball rolling on the seizure scam!

Sadly enough, most people that are attacked on these scams don’t have the money to mount a legal defense and hire an attorney, let alone mount a civil lawsuit offense and sue the hell out of these criminals and animal dealers operating in donation-funded “animal rescue”.

MOST animal owners also aren’t flat-out liars and don’t know how to “work the non-fact-checking media” like these scam-artists at these faux rescues do, so innocent animal owners are in a confused, clueless, terrifying position when a retail rescue does a seizure scam on them.

They end up being broken people that have had their beloved animals stolen from them, they have been bullied, threatened, attacked, and smeared by Internet MOBS ramped-up by the “retail rescue” that’s attacking them, some animal owners are arrested, charged with crimes, and even if they are investigated and found to have done nothing wrong, they VERY OFTEN can’t afford to pay the exorbitant “IMPOUND FEES” being charged by the thieving “rescue” and/or their animals have already been SOLD, or were KILLED by the “rescue” after the “animal with issues” had exhausted their “donation-value”.

This is called “the rescue racket” and the people doing these nasty things are called “rescue ho’s”.

It behooves all animal lovers to PLEASE send the 1 page short-form information page and questionnaire at the link below to ALL animal rescues and also animal controls/shelters and expect answers to the questions BEFORE you send them a penny in donations and/or help them by becoming a part of a mob attacking animal owners you *may*, or *may not* even know.

If they ignore you and/or refuse to answer the simple questions, don’t help them in any way, shape, or form because in all probability, they are up to no good USING animals for their own profit and gain.